I recently upgraded my laptop from a 2013 Macbook Pro to a Lenovo Thinkpad T480. It’s great. I switched around my Ctrl key to the Windows key (where the Command key would be on a Mac keyboard), and everything has pretty much been perfect.

One thing that I did need to rethink was my backup strategy, which, on my Macbook had been ad-hoc TimeMachine. Coming from that, the world of backups on Linux was a little overwhelming. Many backup tools are designed for, or at least documented for, continuously-running server environments, not a laptop. Additionally, the backups will often be something like an automated rsync or scp, and not have a particularly nice ‘set and forget’ experience.

I did a bit of research, and found out that there probably wasn’t a UI tool for my shopping list:

Not much to ask for, I thought, but it proved kind of hard to find what I was looking for. In the end, I did find it though - and the joke was on me, since I had seen duplicity mentioned many times early in my research and had discarded it because “it didn’t have a UI” :-(.

duplicity is a really nice backup tool. This is largely because it’s not really a backup tool itself, more of a tool that sticks a bunch of related tools together into a nice smooth pipeline.

Without any extra installation, duplicity could do all of the things on my shopping list. I even got a neat bonus, where I could use the multi:// backend to backup to a local hard drive initially, and then to my primary S3 backup destination. This setup allows me to have a local, space constrained, not-very-reliable backup that is very fast to restore from - while still retaining my primary, reliable, cost-effective and lots-of-retention data store on S3. I was happy with this. It’s not quite a 3-2-1 backup strategy - I have 2 copies of my data, each on a different storage media, with 1 offsite. I could probably get 3 copies by archiving to Glacier earlier, but my lifecycle rules are currently set up to initially keep backups in S3 only.

So, duplicity could do all the things I wanted it to, but all via command line flags. Not very maintainable, I thought. A quick Google search, and I found that at least one other person thought the same!

backupninja is a wrapper for Duplicity (and a bunch of other backup tools, but I’m just using Duplicity). It supports defining a backup ‘pipeline’ in /etc/backup.d to run a series of backups, one after the other. It also supports scheduling backups and has a very usable curses-based interface via the ninjahelper utility. 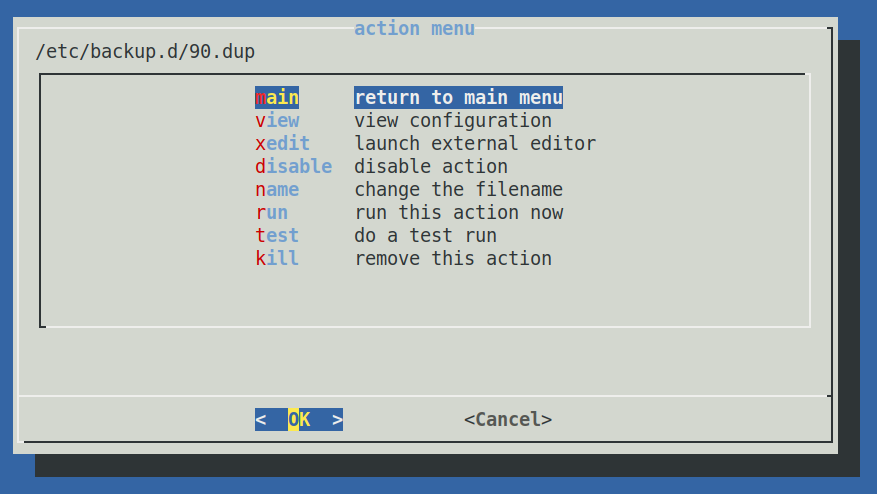 I used the ninjahelper utility to create a Duplicity backup configuration file in /etc/backup.d/90.dup, and then edited it extensively to achieve the backup behaviour I wanted. I won’t post the full configuration file here, but here are some excerpts relating to the points I wanted to achieve above:

The GPG options are pretty simple. I just provided the encryption key and allowed this to be used for both encryption and signing. I had hoped to keep the key password out of the config file, but didn’t have much luck loading it from elsewhere.

The multi destination stuff is pretty neat. The actual config file just had a provider defined, when the provider is actually just a path to a JSON file that defines the providers:

The JSON file contains details on how duplicity should connect to both backends. Once again, I tried to keep secrets out of this file, but didn’t have any luck providing them with any of the standard ways of configuring AWS access key IDs and secrets:

The query params mentioned here do have special meaning as per the duplicity man page:

…and that’s all the configuration. With this approach, I have automated daily diff backups to two different sources - one local, one remote, with two different storage medium. Technically once my lifecycle rules kick in, I’ll actually have three sources and mediums since Glacier backups are stored on a different media than normal S3 blobs (Bluray, I think). I use lifecycle rules on S3 to manage retention, which I can basically configure to be indefinite if I want to, and the pricing is super reasonable, since the diff backups don’t take up too much transfer bandwidth or storage space once the initial backup is complete. Both my local and remote backups are encrypted with a mechanism that I can manage myself - I’m not trusting Dropbox or Google Drive or any other cloud storage provider to keep my files secure - but, since I can, I’m taking advantage of S3 encryption anyway.

Hopefully this has been useful to somebody! I depended on a lot of StackOverflow answers, blog posts, man pages and other resources to put my configuration together - I certainly didn’t just figure it out - but I think that this backup strategy may work well for others as well.

I have a couple of ideas for next steps. Fairly imminent is a restore test, which I’ll probably aim to conduct on an EC2 instance for the first restore just to make sure that everything goes smoothly. If that goes well, I will snapshot my disk and try a restore onto my actual laptop.

I would also like to look into S3 region replication. This is something I normally have set up for website uploads in my deveopment job, but I need to price it out for backups and make sure that it won’t blow things out too badly. If I get replication set up, then along with backups stored in S3 and Glacier, I’ll also have an additional level of redundancy, with backups stored in a completely different region (probably Ireland or Frankfurt since I don’t like putting things is US regions and don’t quite trust London either anymore). Singapore is too close to my physical location to feel safe and my primary backups are already in Sydney.